We are organized at Joves d’Esquerra Verda in order to change the reality that surrounds us. We believe in a fair, egalitarian, feminist, inclusive, ecologist and leftist world. We believe as well in an alternative system in which we can develop our lives in an autonomous way. The current system is outdated and resisting to change – it does not represent us and its promises turned out to be the reason of our frustration. But now there is an unavoidable claim for change.

It has been far too much time in which our only options have been precariousness, unemployment or the exile while our lives have been threatened by inequality. We young people were already a group of precarious individuals before the crisis, and now we find out that we have been used as guinea pigs to destroy the society based in rights and freedom for which many people fought for.

Our political proposal is firmly based on leftist, ecologist and feminist principles. We reclaim solidarity, equality and freedom in the struggle against a system that causes deep social inequality and harms the environment: capitalism, which also finds in the heteropatriarchy, underrating women in all senses for the mere reason of being women, its great ally. We fight as well against the great inequality that, through sexism, LGBT-phobia, xenophobia and racism, seeks to maintain the privileges of a few to the detriment of the rights of most of the population.

As a youth organization we collaborate with the green catalan party Iniciativa per Catalunya els Verds and have a 25 years old history. We are heirs of the socialist youth organizations Joventut Comunista de Catalunya and Joventut Socialista Unificada. Young people are the driving force for change, and we are aware that we need one another. The alliance of leftist organizations is needed to change the current situation. We need to build a collective and broad project, feel it as our own and make it brave and clever enough to turn the whole system upside-down. 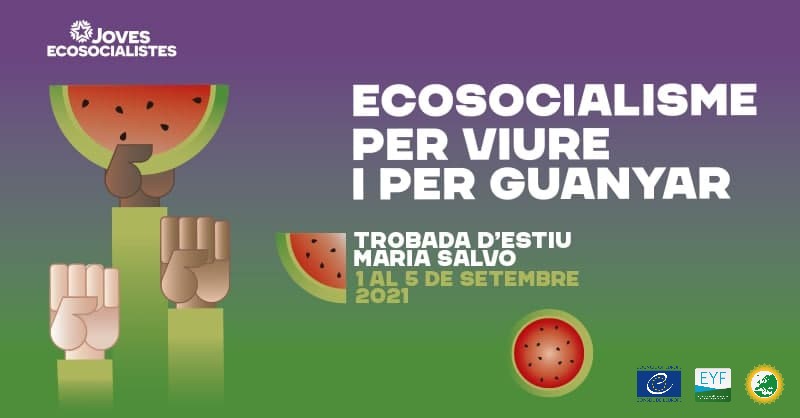